If I was an actress I would be Meryl Streep, not because she is stunningly beautiful, but because of her diversity as an actress! Given a good script and supporting cast that woman can play any character. (Have you seen her in Devil Wears Prada, “That’s all.”) I’ve always liked the idea of playing an alternative character in life. When I’m alone in the shower I pretend I’m Barbara Streisand, when I can’t sleep I think might make a good lawyer considering the closing arguments I have with myself, and I’m pretty sure my family thinks I could be a master chef given the appropriate equipment and budget (Okay, that might be a stretch). I have to admit at times I play the diva, but when no one pays me any attention, I shove her back in the closet. I don’t know why but I’ve been known to let my attire dictate my mood. A pencil skirt brings out my corporate bitch whereas a weathered pair of cowboy boots turns me into a smart ass, motorcycle riding mama, but without the tattoos.

I can emulate Gloria Steinem in an old pair of jeans, cotton t-shirt, and baseball cap but at my age I refuse to torch my bra. Then again a soft pair of yoga pants and over-sized tank allows me to cogitate on my health while lounging on the couch. And even though a bathing suit no longer entices me to play beach volleyball I still enjoy being swaddled in a towel.

But deep down I just want to be a writer, even if no one reads a single thing I produce, I love to play in the sandbox of words. I think authors need as much diversity and courage as actors but thank god we don’t need flawless skin and tiny butts. Of course that begs the question if I were a real author who would I be? There are so many to masters emulate. I love Maya Angelo and her caged bird, or Cheryl Strayed but without going so far off trail, and Elizabeth Gilbert who eats, prays, and loves. Then of course we have Jane Austen who regaled the landed gentry, JK Rowling who gave birth to a modern day deity, and look how Stephanie Meyer eroticized fangs. I can’t leave out Nora Ephron who shares my birthday and heartburn. We have the ‘beloved’ Toni Morrison, Emily Bronte made me hunger for Heathcliff, and at last the indomitable Virginia Wolfe who gave me a room of my own. 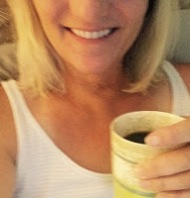 I like to write in my pajamas (old boxers and faded tank), leaning against the backboard of my bed, sipping cold coffee, conjuring up an endearing protagonist who charmingly overcomes the horrors of food shopping. Art imitating life?  I say live on the edge it makes for a good story. I love the idea of leaving my mark on the world, something tangible, fruitful, and enduring like Jesus’ Sermon on the Mount but then again I tend to avoid perfection. I’m a teacher by day and that might be as close as I get to changing the world. Given the right wardrobe and supporting cast we could all be legendary but for now I’ll settle for me and a notable tweet.

Who do you want to be? Put some words in the comments.

If you enjoyed this posting you might also enjoy: Shame is the lock – Vulnerability is the Key