My friend Rachael Arruda, from Rhode Island (yes I have friends outside of California), sent me this short video clip, with older women advising their younger selves, on how to live given a redo. I know this topic has been chewed over a million times, but it stuck on me like a wad of gum (couldn’t resist), and sent me scampering to my computer. The main idea is to encourage young women to spend more time being instead of doing.

Oh my God, how I beat myself up when I think I’m not doing productive, graphable, meaningful work, like cleaning out the linen closet, emptying the dishwasher, and updating my lesson plans. I called my mom last week to see if cleaning out my email counted as a task. She said, “Honey, anything attached to the the words cleaning out counts.”
Really? So I used this on Larry the other morning when I was sitting in bed sipping coffee for like two hours (maybe three). I said, “Honey, I’m cleaning out my cluttered mind.” He seemed to accept this, as he refilled my coffee, and left the room. Now that I think about it, that may have been an uncomplimentary concurrence about my disordered brain?

He came back an hour later and asked if it was possible for me to run a load of laundry while I organized my thoughts, he was out of underwear. I told him, “just turn them inside out and we’re good for another week.” I know what you’re thinking, that is genius, and you are so right. Then I yelled, “Better yet, run a load yourself while you’re relaxing on that conference call, I really need to focus here.” He decided to work out of the Cupertino office for the rest of the day. Was it something I said? 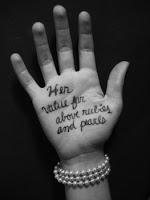 I think this ‘work yourself to death’ ethic stems from our puritan heritage where women were valued for their labor and progenies (or virginity and a dowry if not married). I beg to argue this cosmology of life because I happen to know all the head honchos of the dominant faith traditions were big on just being. Jesus traveled around with his faithful entourage (all of whom dumped their day jobs to follow him), preaching to the crowds, and stopping for meals along the way. There are no less than nineteen meal accounts in the gospel of Luke. One of my favorite gospel dinner parties is the one hosted by Martha and Mary. Jesus says to the feisty Martha, who is complaining about doing all the work, “Martha, Martha you worry about many things, but Mary has chosen what is good, and this will not be taken away from her.” (Full story in Luke 10: 38-42) Now Mary is chatting it up in the living room with Jesus and the pack twelve while poor Marta slaves away in the kitchen. I love Martha by the way and I would so be in Jesus’ face about the inequity of work especially around meals. But the important message here is what Jesus is saying to Martha, your value lies not in what you do, your value is non negotiable. Sit down, join the conversation, your husband can tackle the dishes tomorrow.

Then we have the main Buddha, Siddhartha Gautama, who left his young son and new wife so he could go out into the desert and meditate (I would love to hear the wife’s version of this spontaneous decision). He longed for enlightenment. He hung out with a bunch of fifty year old ascetics learning how to detach from the world of suffering and death by suffering (It’s complicated). And after six long years of just being (and you begrudge me my three hours) he achieved enlightenment while sitting all night under a Bodhi tree all night. It appears that God speaks to us when we are being instead of doing.

We can’t hear God when our minds are absorbed with work, stress, and multitasking. Muhammad was another prophet who found enlightenment after days of seclusion holed up in his man cave. He went scampering back to his wife all freaked out and she said, “Muhammad, be calm, it is God.” I think I need a frickin woman cave. I would have a soft space to lounge, with tons of cushions in muted shades of blue, an espresso machine, and huge bookshelf. Maybe a strong guy to fan me while I read? Living the life God always intended for me…
In the clip that Rachael sent, the women speak of “Being…lost in the moment, being…able to let go, being…at peace with the world, being…kinder to myself, being…kinder to others, and being…proud to spend more time being instead of doing.” Their approach is unique, they expose the frantic pace of our culture, and how this leads to an ideology of perfectionism.
When I was a young mother we didn’t have Facebook, Instagram, and Twitter. The grocery store was my haven, because I didn’t have a cell phone, and could sulk in the pasta aisle as long as I wanted. I didn’t have to chronicle my less than ‘perfect’ life on Facebook. I could have pimples, take my kids to the park in dirty clothes, and uncombed hair. Now you have to worship a false image (Moses would not approve), cast in the stone on social media, that quite frankly no one can live up to or escape. And there are some nasty people out there who jump at the opportunity to make you look bad…really, really bad.

Social media is creating a culture of perfectionist because every moment is recorded, analyzed, and held up to unachievable standards. These older women bring us back to a gentler world with more kissing, dancing, loving, and just being. What I wouldn’t give for more time with my babies, father, grandparents, aunties, uncles, cousins, friends, and beloved pets (even a few houseplants). So this is what I discovered after three hours of just being, we are a good creation, our value is not negotiable, and our purpose is to love. Thanks for the reminder Rachael Arruda of Rhode Island.

Link to full video clip, “If I were a young woman now…”

I value your thoughts! Leave a note in the comments.
If you like this posting you might also enjoy:
This is a Woman to Love
Finding Common Ground
Living in the Gap