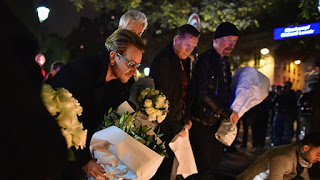 I drove past a funeral the other day and was fixated by the small group of mourners gathered around the coffin. It was the uniformity of the attendees that caught my eye. The shiny brass handles of the coffin stood out like a shrine against the black clad flock of grievers. It made me wonder about the person being lowered into the ground, the viable story that had come to a resounding, and decisive end. I felt insignificant, like a black dot on a graph, incapable of affecting the data, or moving outside the bold cluster of typographical symbols. Maybe it is not possible to differentiate ourselves in a world that demands conformity? Let’s consider the fact that I spent half my life trying to conform to my peers (we imitated cool, we didn’t invent it), harness my energy so as not to offend, and stay within the well-worn path mapped out for me at birth. I had no idea how to be myself. I don’t think it was an option. I remember watching the movie The Bad Seed, when I was way too young, and from then on I was scared straight. I suppose I was frightened by the idea that evil is an organic presence in our world. I was shattered by the main characters total lack of conscience and disregard for the dignity of others. 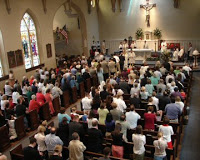 The graveyard scene reminds me that conformity is an important component of most organized religions. There are at least eighty references to sheep in the bible. “Know that the Lord, he is God! It is he who made us, and we are his; we are his people, and the sheep of his pasture.” (Psalm 100:3) Many things contribute to the way we worship, including our upbringing, conversional experiences, doctrine, community, but most importantly I think it is the longing for God in the depth of our hearts. This makes for a beautiful diversity in the way we worship.  I think this terrorizes some people who cannot accept that there is more than one way of understanding God. Let love and compassion hold reign in a world created by God, who claims we are good (Genesis 1:31), and gives us the freedom to live fully.
The Psalm of David says, “The Lord is my shepherd; I shall not want. He makes me lie down in green pastures. He leads me beside still waters. He restores my soul. He leads me in paths of righteousness for his name’s sake. Even though I walk through the valley of the shadow of death, I will fear no evil, for you are with me; your rod and your staff, they comfort me. You prepare a table before me in the presence of my enemies; you anoint my head with oil; my cup overflows. …” I started this blog before Beirut, before Paris, before our world took another morbid turn. And I ask myself, for the love of God, what do I have to fear, but fear itself?  Evil seeds might germinate our world, but I have to believe they will not overtake the garden, because God is with us.
At the age of fifty, I’ve found the courage to look within for the wisdom I need, especially when confronted with the inconceivable. I have to honor my own conscious, not what popular culture dictates, or what is politically correct.  I believe those susceptible to terrorist propaganda are lost souls and incapable of listening to their own hearts. “Beware of false prophets, who come to you in sheep’s clothing but inwardly are ravenous wolves.” (Matthew 7:15)  As people of good will we must stand together, honor our diversity, and celebrate our commonalities even when we are blinded by fear. Just because we don’t speak the same language does not mean we can’t connect on a deeper level, “Come, let us go down and confuse their language so they will not understand each other (Genesis 11:7),” we have to push past all the things that divide us, and seek our common humanity.

Paris is not defined by the attacks, the Syrian refugees by their displacement, or the peaceful followers of Islam by the tactics of violent extremist. Let’s listen to our stories, ask the important questions if we don’t understand, have the difficult conversations, and trust in the goodness of each other. In the Hebrew Scriptures it says, “The Spirit of the Lord God is upon us, because the Lord has anointed us to bring good news to the poor; he has sent us to bind up the brokenhearted, to proclaim liberty to the captives, and the opening of the prison to those who are bound.” (Isaiah 61:1) I don’t know if we can overcome the penitentiary of violence with love and compassion, but clearly new tactics are needed.  When all that remains is faith, hope, and love…love reigns.

It is the humanity of the mourners that catches my eye today. For me, Paris is the shiny brass handle of the coffin, that stands out like a shrine, against the black clad flock of grievers. It makes me wonder about the people being lowered into the ground. We must never allow our goodness, our humanity, our most viable story to come to a resounding and violent end, because of terrorist. “Above all, love each other deeply, because love conquers all.”

You might also like to read: How do we respond to the Gospel of Love or It’s Time to Come Back to the Table