We bought a home on the edge of the water, some five years back, a sweet spot in our otherwise serendipitous marriage. Both of us surrendering to the desire to hack out a space of our own in the California dreamscape. He wanted water, I wanted rows of adirondack chairs, he wanted a boat dock, and I wanted five bedrooms, all within a three hour drive, from our home base in Campbell. Truthfully, it was a ruthless attempt to harbor all of our children at the same dock. We were all living in California at the time, drawn together when our interests intersected, but it was a navigational nightmare to pull us all into same zip code. 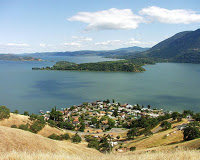 We needed a big carrot, we went in search of this enticement in Lake County, slightly north of Napa, an obscure community bundled around the murky shores of Clearlake. I will not apologize for the five years we spent snooping around other people’s homes, delineating new standards as the economy took a deep dive, and our scale rose. It was an arduous journey. Thank God our realtor was a saint, Scott Bennett, formerly of Beverly Hills, never gave up the hunt. We dragged him all over the lake, in and out of a hundred homes, we made six failed offers, before losing faith in the entire process.

Scott reigned us back in by taking us through a home we could never afford. It was a risky plan. I was angry as a hornet being rolled down the driveway in a mason jar. All I remember was the ugly garage doors facing the street, a forsaken courtyard, and imposing entry. Once inside, I tried to stay aloof, but the interior jerked me down the rabbit hole. The view was spectacular, I don’t remember anything else, except the stab of pain knowing this carrot was out of reach. My head was spinning when we left. We made a fair market offer, it was outright rejected, the owner would not budge a single dollar. We moved on, dragging our search to new shores.

It took two more years before it all came together. I remember we were seated at the Crab Shack, located on the northern coast of Washington, when the call came in. After the recent passing of my dad, we needed a little distraction, Dante was the only one living at home, so we planned a road trip to the town of Forks from the Twilight series, it was late summer when we met up with my mom in Seattle, who joined us for the excursion. Larry took the call outside, but when he walked back into the restaurant, his face was completely ashen. I said, “Honey, everything all right?” I was imagining all sorts of hideous scenarios. He said, “I think we just bought a lake house,” he did not touch the rest of his dinner. I ate all of mine, looking much like the cat, who finally caught her canary.
It was the house Scott dangled before us two years earlier, the one we couldn’t afford. The owner was a pilot, and on a solo flight to his family estate in Lake Tahoe, he crashed his plane in the Sierra Mountains. His five kids wanted to sell the Clearlake house, later we would learn their mother died in the house, and not one of the kids wanted the property. We were the only offer made on the house in two years, they wanted to know if we were still interested, and we said “yes” to the house.
The home is spacious and cavernous, exactly the opposite of what empty nesters need, more like a rambling ranch that stretches out like an ant farm. The previous owner added on by dividing a single room into two, it’s a little cramped, but it works. We did the same to one of the bathrooms. It now sleeps twelve, if you count the port-a-crib, with three toilets, and a bunk room in the back of the garage. Like Sarah Winchester, I want to keep adding on, maybe build a unit over the garage. Larry is sour to most of my ideas, but I’ve learned to wait, then harvest when the time is ripe. After a few years of feeling isolated in the walled off kitchen, we added french doors to the patio, a much needed portal for these high traffic areas. The walls are decoupaged with kodak moments, we keep the wine refrigerator full, and the welcome mat out.

Early one morning, I am lounging on the back deck, with a steaming cup of coffee, as I watch the bats come swooping in, after a long night of gorging on rice flies. I feel a tingle of fear, but mostly a kinship with these ancient creatures, coming to rest in the cypress trees that line the property. I lean back into the weave of my chair, tuck the blanket tightly around me, and covertly watch their return. It is like a choreographed dance, the fancy dips and final dives, before the curtain of darkness is lifted. It might only be a three hour drive from the city to the lake, but the landscape is as different as a cold shower is to a warm bath. It is peaceful here, so peaceful I can hear my own thoughts, the kids will be swooping in soon, and I’m so happy with this sweet spot in our otherwise serendipitous marriage.
Come visit us at the lake sometime and share the peace…
You might also enjoy: Bring a Change of Underwear or Thin Places