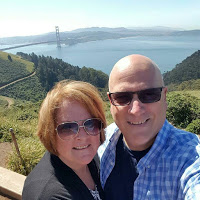 She is gentle, he is sturdy, and together they are a killer combo of divine providence. Of course I’m talking about the Arruda’s, of Providence, Rhode Island, and believe me when I say their accent alone will keep you captivated. Friendship is one of those rare and unique phenomenons. When you find it, you hang on tight, even when it resides on the other side of the country.

It all started with a few sharp knives, a little wine, and a romantic villa overlooking the charming medieval village of Castro dei Volsci, in Central Italy. This would turn into one heck of an adventure, with all the usual suspects, a few menacing subplots, and an extraordinary host, Gregorio, who would weave this group of strangers into a fine tapestry. We would come away forever changed by the colorful experience of Casa Gregorio. 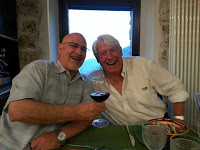 It was a tense decision, we had twelve hours before the coupon expired, a hefty financial commitment looming over our heads, and oddly enough complete strangers were making this very same decision in Canada, Texas, Rhode Island, and Virginia. Miraculously, we all pulled the trigger, there was nothing else to do, but prepare for an exotic vacation. And I believe that calls for an Egg Wash!

Phyllis, Greg, Jill, Steve, Larry, and I were hankering for a novel experience to celebrate thirty years of wedded bliss (Yes, I’m refering to the nonstandard form of bliss). I’m just sayin, beware of what you wish for, because God has an odd sense of humor, and a kink in her creative genius. (Jim and Mary were not ready to leave their nest unattended, but they were with us in spirit)

The day finally arrived. Phyllis, Greg, Steve, Jill, Larry and I met up in Rome with all the eagerness of school children on their first day of summer vacation. In one lively night we made our mark on the historical district of Rome. There is a tiny cafe, located on one of the many side streets, that proudly displays our picture, the caption below reads “Americano Pazzo.”

I admit I was slightly under the weather the next morning, but the airlines managed to find my lost luggage, and with great anticipation we headed for Castro dei Volsci. Our excitement was palatable although I was half expecting to encounter some kind of Italian Dracula. We gathered at the airport, loaded into vans, and within hours our caravan passed through the entrance of an ancient mountaintop village. We made the slow climb up the cobbled street, shifting in our seats, stretching our necks for a glimpse of the villa. All wondering the same thing, What the hell did Phyllis get us into this time? When the villa came into view, we let out a collective sigh of relief, every expectation blown away in a single magnanimous glimpse.

There was an exchange of nervous twitter as we entered the restored villa and waited in the lobby for our room assignments. Gregorio personally escorted each couple to their room, pointing out special features like rain showers, down comforters, jacuzzi tubs, rare antiques, and Persian rugs. I’ll be honest, I felt like I entered a modern-day fairytale, and in this story I was the princess. Larry would just have to deal. 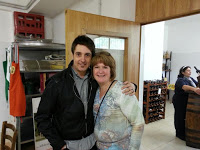 We gathered for lunch at noon in one of the many formal dining rooms (I think there are at least four). I slipped into my swanky new pantsuit befitting the status of a recently crowned princess. We were seated at an elegant table, laden with interesting food, and several crafts of wine. The Arruda’s sat opposite our host, introduced themselves as Rachael and Dave, from Rhode Island, with this appealing east coast accent. What else can you do but force them to keep talking? They were outgoing, accepting, oozing with charm. We were intrigued but didn’t want to appear too eager.

Each morning we gathered for coffee, pastries, and frittatas. Our daily excursions included trips to a winery, goat farm, sausage factory, the beach, local markets, exclusive shops, olive oil factory, (As you can see Vincentio was quite memorable) to gather local produce. Arriving back at the villa in the afternoon, we had just enough time to rest, before cooking instruction began promptly at 4:00. A space was prepared for each participant, including our own cutting board, ingredients, and sharp knives.

We were instructed to finish all of our chopping before enjoying the fine wines. I believe this policy saved more than a few fingers. The evening spaced itself out with specialized cooking instruction from a host of visiting chefs, lavish amounts of food, and more wine. The princess gained ten pounds in less than a week. The meals were created from local produce gathered and prepared by the participants. Our beloved term “Egg Wash” came about while adding color and shine to our pastries and toasts (it stuck). The tables each night were meticulously set to enhance the diverse menus which included homemade pasta, pizza, gnocchi, sausage dishes, sauces, frittatas, desserts, and more.

In the evenings a few of the guests walked up to the local bar to enjoy a nightcap, smoke cigars, and chat. Patrizio and Justino, employees of Casa Gregorio, would often join us. One night Patrizio started calling Larry Papa because he fell in love with a picture of our daughter Kelley. This was when our relationship with the Arruda’s and our future son-in-law started to bloom.

The plot thickens in the middle of the night when one of the guests has a medical emergency. There was a lot of screaming, people running around in their skivvies,  calls for help, ambulance drivers, and a trip to the emergency room. Rachael offered to accompany the distraught wife, because she needed support, and Rachael is made that way. The rest of us waited at the local coffee shop in the village for news of our stricken companion. He was miraculously healed by mid-afternoon and given permission to participate in the on-going activities. This incident brought us closer as emergencies often do. Our talks took on new depth, our care for each other expanded, our sense of community firmly established. Of course we all became Facebook friends.

“The friend who can be silent with us in a moment of despair or confusion, who can stay with us in an hour of grief and bereavement, who can tolerate not knowing… not healing, not curing… that is a friend who cares.” Henri Nouwen

When this incredible week came to an end, our crew headed to Sorento for a few days of rest, and dining out (let’s pack another five pounds on the puffy princess). The Arruda’s headed back to Rhode Island, the Haas’ to Virginia, the Davidson’s to Texas, Neufeld to Canada, and of course Patrizio, and Justino were to remain in Italy. We promised to keep in touch, you know how that goes, but we soon became known as the California Six on Facebook. Oddly enough, we continued to grow our friendship virtually. Patrizio surprised us all with a quick visit last winter and we let out a big Egg Wash when the Arruda’s booked tickets to San Francisco last week.

When they arrived at the Bahue’s beach house we didn’t miss a beat, started up right where we left off, and of course they brought along those charming accents. We ate, we drank, and we conversed into the wee hours of the night. There was new life to celebrate, occupational updates, children’s marriages, personal accomplishments, along with grieving, and loss. All the attributes of lives well-lived and people in the process of becoming.

A road trip up the coast was the mornings decreed. We were graced with a most perfect day, I think the thermometer pushed past 80 degrees, and we made good use of this climatic change.

Our first stop was the Santa Cruz dump (for two reasons: to appease Steve and to enjoy the incredible view) and then onward to the Beauregard Vineyards in Davenport, Duarte’s Tavern in Pescadero (we ate an entire loaf of artichoke bread in less than ten minutes – Egg Wash!), a little wine tasting at Sante Arcangeli’s, and ended our journey in Half Moon Bay. It was an extraordinary day with a bittersweet good-bye to divine providence. Here’s to the Arruda’s, until we meet again…

“In the end, it’s not the years in your life that count. It’s the life in your years.” Abraham Lincoln

It all begins in the comments – Egg Wash!

You might also enjoy: Grab Yourself a Cozie or What I Wouldn’t Give