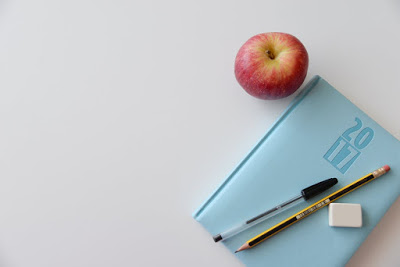 It came in the mail today, the large white envelope, the one with the Notre Dame Crest attached to the return address. I refer to it as the package, it’s not that I’ve been dreading it all summer, but it does send me down the hypothetical wormhole, catapulting me from one reality to another. This is usually when I call my mom and complain profusely, she’s not available this year, so if I ring you up, kindly take my call.

Am I being a little dramatic? I didn’t think so.

The package is crammed with pertinent information about block schedules, teaching assignments, and most importantly our designated classrooms. I can map out the next few months of my life with this data. There’ll be a flyer on the “welcome back” barbecue and lots of announcements about new teachers, supervision schedules, collaboration, and department meetings. I toss the package unopened on the nightstand.

There are physiological changes taking place as I consider the approaching academic year and there is nothing I can do to alter this reality. My corpus callosum, the one that connects the left and right hemispheres of the brain, is bellowing in agony. Time to come out of hibernation and back into service. The hiatus is over.

Woe is me.
It’s the end of Jimmy Buffett and the beginning of Sir Ken Robinson, Bloody Mary’s will be replaced by pots of strong coffee, my bare feet ruthlessly stuffed into a pair of swanky Rothy’s. I have to start plotting out my lesson plans instead of scenarios for Game of Thrones. The paperback novels get shoved back on the shelf, calendars take front stage, and educational blogs are my new focus.

Lord have mercy.
I’ll have to adjust to the obligatory daily shower and believe me when I say there is no room for hiccups here. I’ve always considered grooming such a bother, but when you’re standing in front of 30 teens, teaching a study on comparative religions, you can’t wear a housecoat, and strut around in dreadlocks. Bad breath is a complete faux pas.

“Some students drink at the fountain of knowledge. Others just gargle.” — E.C. McKenzie

One semester I wondered into my first block with my shirt on backwards. It happens. I lost complete control of the class, all-girls school, drama much? They insisted I turn the mishap around immediately. I don’t think they meant standing in front of the class like an escape artist.

It was “epic” as noted on Facebook seconds later.

I’m just finishing up a novel by John Grisham, he’s the guy that writes his characters into dire situations, followed by miraculous resurrections. The character I’m currently championing for is a lawyer, who steals 90 million dollars from his own firm, and hides out in Brazil with a beautiful woman. He’s found, ruthlessly tortured, and brought back to the United States for trial.

On a much smaller scale I feel much the same.

John is a little wordy, it took 500 pages to tell the whole sordid tale, but the ending is worthy. Segue, the ending of summer is not what I expected, but then again I didn’t embezzle 90 million dollars, take cover in the jungles of Brazil, with a hot pool boy. I am feeling a little tortured by the package sitting on my nightstand, not unlike the package the protagonist was hiding, which ended up being the source of his salvation.

Catholic guilt makes me dutifully peal back the sealed flap, with false bravado I pull the contents out of the envelope, rifling through the material like a seasoned lawyer. Eureka! I don’t have a first block this year. This is good news for Campbell commuters. I remember last April sitting at a stop sign, at some god awful hour in the early morning, waiting for it to turn green. The guy behind me was not a patient man and laid on his horn. He could have been offended by my hand signals, but luckily it was someone I knew, and married.

I found out all my classes are located in the same building, no running like a mad woman across campus in a ten minute passing period, hoping to get my lesson plans up before the students arrive. I have all ground floor classrooms this year which means I avoid the jammed stairwell in Donnelly between blocks. This schedule feels very much like there may have been some divine intervention. No phone call but she heard me nonetheless. Thanks ma.


Living in the Gap, drop in anytime.


Please feel free to shed your grief in the comments. Misery loves company.