“I would rather sit on a pumpkin, and have it all to myself, than be crowded on a velvet cushion.” Henry David Thoreau

Is there something wrong with waking up before dawn, slipping out of a warm bed, tip-toeing to the kitchen, brewing a cup of coffee, before shamelessly worshiping the iconic shades of crimson veiling the eastern sky? I didn’t think so. A scene so perfectly mirrored on the smooth surface of the lake as if a divine klecksograph. So captured am I by the stark beauty it takes my breath away. 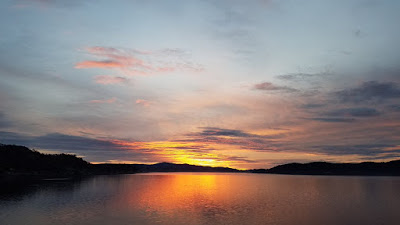 Carolyn Moore says if this isn’t a day when your universe has tilted and something precious you take for granted has not been suddenly irrevocably lost, bow before the mystery and let gratitude wash over you. Nailed it Carolyn.

Things may have tilted sightly in my world but I’ve no doubt a weekend at the lake will reorient my perspective. In all honesty the reason I’m able to roust myself out of bed before dawn has nothing to do with discipline, and everything to do with the phenomenon of fall, where darkness encroaches on the light, as if day took a step back, and let night take center stage. It’s sort of sweet, waning on purpose, so your lover can wax. I like how Oscar Wilde describes it, “and all at once summer collapsed into fall.”

I’ll admit to a disordered obsession with the traditional demands of fall, like carving pumpkins, roaring fires, football games, minestrone soup simmering on the stove, a landscape carpeted in scarlet, saffron, and russet leaves, platters of sharp cheese, walnuts, grapes, and crostini lounging on the coffee table, the last sip of sauvignon blanc replaced by the bolder flavors of cabernet and zinfandel.

My palate salivates for the flavors of fall.

I’ve been stockpiling miniature treats for Halloween for a month but honestly it’s a coverup for late night snacking (let’s keep that between us).

“I’m so glad I live in a world where there are Octobers.” L.M. Montgomery

In the early morning, I pretend to have been summoned by the elders of an ancient tribal community, rising with the sun, fighting the urge to dance naked along the shore, beating my chest, chanting “do-lang, do-lang, do-lang.” I would never do that, really, I’m an adult.

The quiet is utterly refreshing, the water so calm I believe I could walk on it’s reflective surface, moving closer to the majestic peaks of Mt. Konocti which dominates my view, but like Peter I’d get half way across, and no doubt my fears would weigh me down. (it’s biblical, feel free to move on)

I want to stretch out the morning like a good book, pushing back on the demands of the day, lingering with the hypnotic company of coffee and unmitigated thoughts.

“October, baptize me with leaves! Swaddle me in corduroy and nurse me with split pea soup. October, tuck tiny candy bars in my pockets and carve my smile into a thousand pumpkins. O autumn! O teakettle! O grace!” Rainbow Rowell

Staying in wrinkled pajamas all day is my objective, well that and splashing the best possible words across the page, I should add without unnecessary interruptions.

I only mention this because my husband just crashed my tranquil space, jumped on a conference call, slapped on noise canceling headphones, and has no idea how loud he is talking. That vibe I was describing earlier has mysteriously disappeared?

He snaps his fingers in an attempt to get my attention, you can only imagine my reaction, it was as if I unexpectedly ingested a chili hot red pepper. “Excuse me?”

He says, “Could you boil some eggs, I’m starving.”

“You’re staring out the window?”

I spend ten minutes slaving over a hot stove while his eggs boil (I heroically resist playing with that image). Ding…the timer goes off. I set the eggs before him, with salt shaker and napkin, but before returning to my reveries, I lift his headset and whisper, “no snapping, it makes me want to do things I would deeply regret.”

Two minutes pass, I write one word. Wrinkled. From the corner of my eye I see him aggressively pointing to the dog (I think he wanted to snap, but thought better of it, good boy).

He mutes the phone, “Shaggy’s gotten into some spurs.”

I glance over at my matted dog lounging at Larry’s feet, “Yes he has, you can probably remove those while you chit chat on the phone?” I get the look. After removing seven spurs from Shaggy’s mangled fur I go back to my writing. I’m in the zone people, I have my own distractions.

His conference call finishes and now they want to go for a walk?

I grab the leash off the hook in the hall and meet them in the courtyard. Maybe I could use some fresh air since I have not been able to get past this wrinkle?

“Her pleasure in the walk must arise from the exercise and the day, from the view of the last smiles of the year upon the tawny leaves and withered hedges, and from repeating to herself some few of the thousand poetical descriptions extant of autumn–that season of peculiar and inexhaustible influence on the mind of taste and tenderness–that season which has drawn from every poet worthy of being read some attempt at description, or some lines of feeling.” Jane Austen

On our walk I decide we could learn a thing or two from the trees, how they let go of their dead leaves, without a lot of grief? Or do they silently mourn the loss of their foliage? I ask Larry for his thoughts on the subject. He sort of looks at me like I’m insane? He’s a strange one.

I don’t know about you, but those newly exposed branches remind me of my waning years, and vulnerable limbs. Makes me nostalgic for the spring.

There must be a hundred blackbirds chirping in this one decrepit mulberry tree. They seem frazzled.

“The birds are consulting about their migrations, the trees are putting on the hectic or the pallid hues of decay, and begin to strew the ground, that one’s very footsteps may not disturb the repose of earth and air, while they give us a scent that is a perfect anodyne to the restless spirit.” notes George Eliot.

I point, “look at all those birds. I wonder what they’re all squawking about?”

Without missing a beat he says, “food or sex.”

“Stellar insights, I can’t wait to get back to the house, and get those down on paper.”

“Or they could be annoyed with their wives.”

“Or frustrated because they can’t snap.” #snap

I’m enormously grateful for this respite at the lake especially after a trying week. Back at the cabin I nestle in the double wide chair cradling my desultory thoughts. Deciphering the motives of others is a waste of time, it’s far more effective to build connections, form alliances, and find the very best you can in those you engage with advises Seth Godin. I’ve seen how derogatory behavior can derail relationships and malign trust but what frustrates me most is our predilection for division. I’m left wondering how to shield myself?

Be a lamp or a lifeboat or a ladder. Help someone’s soul heal. Walk out of your house like a shepherd. Rumi

Personally I prefer environments shrouded in trust, good-will, and friendship, but over the years I’ve learned this is not as common as one would think. Too often we bend to the fears of others. I’ve come to believe we replicate that which we know, what we have encountered, as humans we’re attracted to familiar environments, even hostile ones if that’s your experience. Are we therefore not so different from the seasons which perfectly replicate themselves year after year?

The day is napping along with my husband and dog. I’m standing at the window, transfixed by the view of the lake. It’s a beautiful, bright autumn day, with air like cider and a sky so blue you could drown in it writes Diana Gabaldon.

The word season when used as a verb means to make suitable for use by adjusting ones flavor to that of the environment in which it will be used. That’s it, that is the nugget I’ve been searching for. How do I become more savory in a challenging environment? Season with kindness because anything else would render me tasteless. With this shift in thinking I feel something stir inside me. I’m calling it gratitude, perfectly seasoned, and oh so refreshing.

“… the extraordinary autumn weather that always comes as a surprise, when the sun hangs low and gives more heat than in spring, when everything shines so brightly in the rare clear atmosphere that the eyes smart, when the lungs are strengthened and refreshed by inhaling the aromatic autumn air, when even the nights are warm, and when in those dark warm nights, golden stars startle and delight us continually by falling from the sky.”
― Leo Tolstoy, War and Peace

I’m Living in the Gap, drop by anytime, we’ll jump in a pile of leaves.