I acknowledge faith is one of those topics to avoid when attending dinner parties, hunting expeditions, or PTA meetings, but I figured if I disguised it in a blog you might not notice.

I could be wrong.

Faith is one of those words that people have grown weary of these days and I don’t blame them. We swim in the same waters as evangelists, extremists, terrorists, and politicians. They give most things a bad vibe. But today, I want to give the word a hall pass, free from all those stale attachments, and overbearing relationships.

Let’s toss this coin in the air, see where it lands, who knows we could get lucky.

Here are some indisputable facts. I’ve never lived a single day without my sibling, my faith, or my thumb which pacified me until I went to college. I had companionship, a belief system, and knew how to self-soothe (a highly underrated skill). Ask my dentist, he called me a dental disaster and extorted thousands of dollars from Larry to put things straight. But I digress.

These are my truths and it is not possible to understand the significance of these foundational influences on my life. Firstborns might have their faith, and opposable thumbs, but they had the undivided attention of their parents for at least nine months and that is a game-changer.

My husband is a firstborn along with my daughter Julie, both born in April, both interestingly similar. Strong, resilient, generous, confident ~ natural-born leaders, team players, and loyal. They’re also annoying (some call it persistent), bossy, and stubborn as hell.

Jesus was a firstborn, probably born in the spring, and just as stubborn.

Today is Palm Sunday in the Christian tradition, it’s also Cora and Sienna’s (my twin granddaughters) fifth birthday, but as a twin, you don’t even get time alone in the womb. It would have been sort of interesting if Jesus were a twin.

I have to say Father, Sons, and Holy Spirits sound more like a liquor distributor than a blessing. 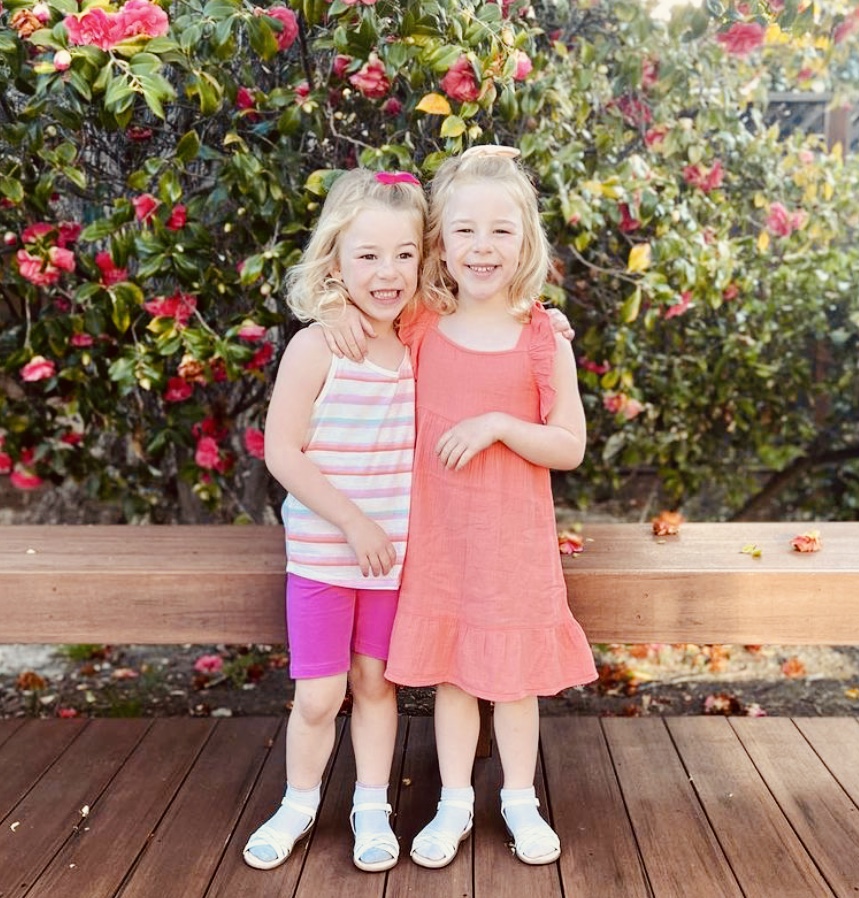 When the twins were born my faith did a cartwheel. Identical twins are as rare as white peacocks and jeweled squid. It took our collective energy just to keep them alive.

Today they are five and miraculously they live across the street. It was a combination of generosity, good timing, and preparation.

I apologize for the labyrinth you had to go through to get to the main point but here it is.

Let’s dissect the word preparation as if it were a frog. I want to look at the heart of the word, and see if it has a liver or a good set of lungs.

Did you know that scripture refers to faith as a form of preparation? That’s the heart of the word.

Being prepared means staying alert, holding tight to your convictions, and not getting caught in the web of modern society because life can turn on a dime and you need to be ready.

To resist the allure of materialism for one, the ease with which we slip into self-centeredness (my daughter Kelley says I live there), along with a plethora of idols and addictions that only serve to numb our frustrations, heighten our fears, and damage our livers.

Do you remember those bumper stickers? Back in the day, it meant the bearer of said sticker had been saved by “it” a secret code for Jesus. Why they plastered them on the bumpers of every other car in America is still a mystery to me.

But I think there’s a deeper message embedded in this campaign. We’re born with an innate inward longing, always in search of something that can satisfy our thirsty souls, and quench our desires.

We’re trying to capture “it.”

It’s why I write.

What I want today is completely different from what I wanted when I was five and prayed for a fluffy skirt on my Easter dress. Now I just want more time, time to watch the grandkids grow up, and hang out with the people I love. Fame, fortune, and the corporate ladder hold no appeal (Okay, less appeal).

I want deep and abiding relationships based on shared values, mutual respect, and kindness ~ no fluff.

We don’t have to have the same perspective on sexuality, religion, finance, or politics but we have to care enough about each other to listen and respect our differences.

How boring would it be if we were all the same?

I don’t need unnecessary drama, meaningless conflict, or passive-aggressive types in my life who only want to gossip, demean, or behave rudely.

Love is kind. If it’s not, it’s something else says, Bob Goff.

Today is the beginning of Holy Week, the most sacred week of the entire liturgical year for those who practice Christianity. It walks us through the last week of Jesus’ life on Earth. From the scriptures, you get the distinct impression that Jesus knew exactly what he was doing as he entered into his final days and he did so willingly sticking stubbornly to his convictions.

It all starts with Palm Sunday, as the fickle crowd cheers Jesus’ entry into Jerusalem. The following day Jesus cleanses the temple, turning over tables, causing a rukus, which stresses out the authorities who are trying to keep some sort of order over the thousands of Jews coming into town to celebrate Passover.

Remember in his day there were no cheap motels or Mcdonald’s. It was one big tent city with no sanitation. Oh, like San Francisco is today. Couldn’t resist, but you get the picture.

Jesus travels around with his disciples stressing the importance of faith but when he predicts his own death his disciples freak out. They would prefer a living savior but Jesus promises to send an advocate when he is gone. The Holy Spirit. Not the same but it’s something.

Then there is an unexpected plot twist. He hosts a traditional seder meal on Passover announcing that he will be betrayed by one of his own. Isn’t that always the case? After prayers in the garden of Gethsemane where it is rumored he sweat actual blood, Jesus is identified by Judas with a kiss, arrested, convicted, and crucified. He is placed in a tomb and a few days later some women discover his body he is missing.

According to scriptural redactions, Jesus is resurrected into heaven and reunited with all that is good and holy. Can I get an alleluia?

This is the pinnacle of the Christian faith. He is risen, and in and through his resurrection, we are granted new life. The fancy dresses, bunnies, and egg hunts are temporal additions.

The deal is we’re free from the burdens of our own sins and our path to eternal life has been firmly established, but of course, it’s conditional

It’s based on your faith. Your preparedness for the unexpected, the unseen, the unknown.

Hebrews 11:1 says, “Now faith is the assurance of things hoped for, the conviction of things not seen.”

My faith has aged, it has wrinkles, and my interest in the organized aspects of the tradition have waned. The biblical stories are still foundational, like siblings, and opposable thumbs, but I’m mindful of the fallacies of men, especially ones who are empowered, and exclusive.

Keep in mind Jesus was a radical, a revolutionary, someone who rebelled against the religious elitist who sanctioned rules that were hypocritical, divisionary, and did not bring people closer to God.

He declares in Mark 7:15, “it’s not what goes into your body that defiles you; you are defiled by what comes from your heart.”

Oh, how I love that.

He and his entourage were being harrassed for failing to wash their hands before meals, healing on the Sabbath, and hanging out with loose women. Oh my! Jesus abolishes the idea of trying to please God through religion especially when religious rules get in the way of mercy, compassion, and justice.

Jesus is accused in Matthew 11:19 of being a glutton and a drunkard, a friend of tax collectors, and sinners.

The same could be said of me.

As Pope Francis says, “who am I to judge.”

At some point, I decided instead of challenging the teachings on controversial topics like the virgin birth, miraculous healings, and resurrection, I would take a new approach. Thresh out the grain from the straw if you will. What is free will but the ability to recognize the difference between good and evil? Maybe the crucifixion was humanity’s inability to distinguish between the two and God was simply resurrecting the mess we made? Mary’s yes to God required something humanly impossible and a virgin giving birth to the son of God is certainly revelatory.

I admit the grain of truth is not always easy to find.

I had to look within myself, figure out what was right for me, and since I didn’t want a dozen kids, I choose to utilize my reproductive rights. I also choose to understand the scriptures from a more parabolic perspective, the ancient writers of Holy Scripture were masters at the use of metaphorical language. Jesus spoke in parables, using the art of storytelling to extol truth and criticize hypocrisy.

Which was as rampant in his day as it is in ours. So these stories continue to be relevant.

Jesus was inclusive. He welcomed all who he encountered, he healed the sick, forgave the sinner, and comforted the poor and downtrodden. He called us into relationship with an intimate and loving God and then he had the audacity to claim that by loving each other we are loving God.

How simple is that? Well, Putin could use a refresher.

The lessons I cling to are ones of faith, a faith in the ability of God to hold me, envelope me if you will, even the wayward parts.

I’m the sinner thrown naked at his feet, we all sin (which I define as a failure to love), and no one is exempt.

But Jesus understands entrapment. He kneels down, meets me where I am, wounded and withering in the dirt, surrounded by my enemies. Has nothing changed?

In a bold and unexpected move, Jesus stands up and says, “Let any of you who is without sin be the first to cast a stone at her.”

Then he resumes his bent position to write again on the ground next to my feet. He was probably drawing hearts in the sand. One by one, from oldest to youngest, the people slip away quietly until Jesus and I are alone.

Jesus asks, “Has no one condemned you?”

When your dark side says you are no good, you deserve to be pushed aside, rejected, abandoned, remember this, it contradicts the core of our existence, that sacred voice who calls us beloved.

I wish you all a holy and hallowed week, regardless of faith, may we move through life naked, unguarded, knowing we are all deeply and profoundly loved. This is what I found.

I’m Living in the Gap, quibbling with my faith, dare to join me in the comments?

I Found It.* A marketing campaign put on by the Campus Crusade for Christ (CCC) and other Christian groups in early 2002. The simple slogan I Found It was printed on flyers, silkscreened on bright orange shirts, scribbled on chalkboards, and eventually on bumper stickers. Students wondered what the I Found It slogan meant and what it was trying to sell. After weeks of masking the campus with their slogan and keeping their interest a secret, the Christian organization revealed that what they found was Jesus Christ.